To see more photos from the event — including all the young traders — click here. 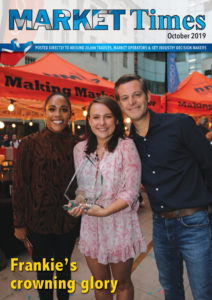 To read all about it in October’s Market Times click here.

Want to take part in the Young Traders Market programme in 2020?

THE grand final of the NMTF’s Young Trader of the Year initiative attracted an audience of millions.

The BBC prime time programme The One Show, which regularly has an audience of around five million viewers, filmed the final of the competition held over two days in Stratford-upon-Avon.

More than 60 finalists from all over the country, aged from 16 to 30 and selling every type of product imaginable, traded on Waterside, creating a massive attraction for the throngs of people who flock to William Shakespeare’s birthplace and doing a roaring trade to boot.

And when the four category winners were announced The One Show invited them to set up stall on the piazza outside the programme’s studio at New Broadcasting House in central London where presenter Matt Baker announced the winner of the competition live on air with the help of co-presenter Alex Scott and studio guests the Hairy Bikers.

The worthy overall winner was Frankie Farrar, aged 22, from Sheffield.

Frankie’s eye-catching business, Stirring Silver, went down a storm in Stratford where queues formed for the silver rings she makes from old spoons and the lights she crafts from unusual objects such as brass musical instruments and old sewing machines.

Watch the programme on BBC iPlayer.